(MENAFN – The Conversation) On the evening of the 2021 UEFA Champions League final, Chelsea and Manchester City will face off for European glory. Only one of the two English teams will walk away with the trophy – but despite the rivalry on the pitch, the two teams have a lot in common off the pitch.

They were, for example, part of one to usurp the very tournament they were trying to win, with the creation of one. That plan, involving 12 of the world’s biggest clubs, fell apart amid unfiltered outrage from – and most importantly, a change of mind at Chelsea and Manchester City.

The Super League house of cards seems to have really started to fall apart when Chelsea announced their intention to do so. Their move was followed a few hours later by a similar one.

Manchester City have won the Premier League this season. EPA-EFE

There was that Chelsea’s U-turn was caused by a phone call from Russian President Vladimir Putin to his compatriot Roman Abramovich, the billionaire owner of the London club. Some media have even suggested that Putin said a super league will be.

But however these decisions were made, the reality of the geopolitical and economic basis of European football is clear. And this is where the action of the Champions League becomes particularly interesting, especially in its associations with oil and gas.

Russian company Gazprom – a company whose origins as a state power producer can be traced back to the former Soviet Union – has been a major sponsor of the competition since 2012 and has just announced one.

Gazprom was privatized at the start of the reform period of the 1990s in Russia, but Putin’s rise subsequently led to the takeover of the majority of the company’s shares. Gazprom subsequently acquired a rival energy company, the oil company Sibneft.

Gazprom, which is based in St Petersburg, Putin’s hometown, also owns the local club. The former president of Zenit is Alexander Dyukov, a man who is also. In addition, Dyukov is the managing director of Gazprom and, in the midst of the Super League debacle, he was elected to the.

If Putin really called Abramovich about the Super League, it could be seen as yet another installment of Russia’s engagement with football as a geopolitical and diplomatic tool.

For many years, why would an organization that sells gas to governments sit alongside McDonald’s and Coca Cola as a Champions League sponsor. But the answer to this can be found in the way Gazprom empowers Russia through its associations with the world’s favorite game.

During his tenure as US president, towards Russian energy suppliers, and even imposed sanctions on Gazprom. that Europe’s growing dependence on Russian energy supplies, particularly in Germany (where), constitutes a strategic threat to the security of the continent. The Joe Biden administration.

But maybe being a tournament sponsor and having a strong relationship with UEFA and Chelsea is not enough. Because Gazprom also continues to strengthen its relations with Abu Dhabi, the small Gulf state which, through a member of its royal family, holds a majority stake in Manchester City.

Like Russia, Abu Dhabi has some of the largest carbon reserves in the world. In this sense, the final of the Champions League will therefore be a game powered by gas and oil.

Over the past decade, relations between Russia and Abu Dhabi have grown stronger, leading to a series of strategic deals, the most important of which was. as a turning point in bilateral relations, it covered all kinds of issues relating to investment, trade, culture, space, tourism and security. 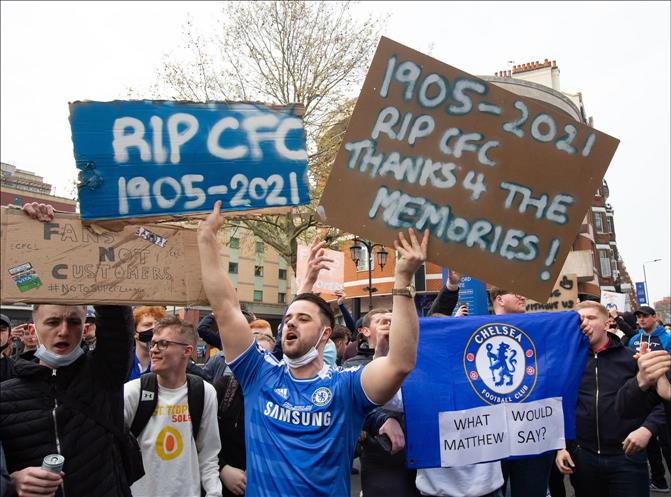 Chelsea fans have protested in London against the proposed formation of a European Super League.

One of the results of this transaction was the acquisition by the public company Mubadala Investment Company of Abu Dhabi of a stake of 271 million dollars (191 million pounds sterling), 44% in one of the subsidiaries of Gazprom. In 2019, Abu Dhabi’s national oil company then signed an agreement with Gazprom to explore and extract new oil reserves.

This led to Gazprom and Mubadala engaging in technology cooperation in Siberia, where, coincidentally, Abramovich began building his gas-powered fortune.

On match day, most City and Chelsea fans won’t be too concerned about the origins of the money that has fueled their clubs’ success. And with talk of a super league’s demise and many football fans hailing its defeat, some will see the Champions League final as a victory parade for normalcy.

But that would be naive and misguided. Because football has not only been commercialized and industrialized over the past 30 years. It has also become intensely geopolitical and lies at the heart of a complex global web of interests and investments. Indeed, for some powerful players, the sport has become a tactically astute medium for other extremely lucrative purposes – as illustrated in this year’s Champions League final.

Legal disclaimer: MENAFN provides the information “as is” without any warranty of any kind. We do not accept any responsibility for the accuracy, content, images, videos, licenses, completeness, legality or reliability of the information contained in this article. If you have any complaints or copyright issues related to this item, please contact the supplier above.

Most Americans think GOP is working against ...