Murder of Sir David Amess: Priti Patel says security measures must be in place – but MPs “cannot be intimidated by any individual” | UK News

Priti Patel said it was “fair and appropriate” for MPs to be accessible to members of the public following the murder of Sir David Amess – and stressed that the security of politicians and an open democracy “can absolutely be balanced”.

The Home Secretary’s comments came as a spokesperson for the National Council of Chiefs of Police (NPCC) confirmed that every parliamentarian will be contacted today about their security arrangements by a chief of police. police as part of a review of the safety of the deputies.

Operation Bridger, a nationwide police security operation established in 2016, will reach over 600 MPs to discuss their safety provisions following the murder of Mr. David during a constituency operation on Friday – the agents then reporting their findings to Ms. Patel.

The NPCC spokesperson also urged MPs to “immediately report any security concerns” to their local forces and said funding for additional security measures is available through the Independent Parliamentary Standards Authority (IPSA) on the basis of threat assessments carried out by the police.

Ms Patel confirmed on Friday that she had called on all police forces to immediately review security arrangements for MPs after the murder of sir david in Leigh-on-Sea, Essex.

It is understood that the Home Secretary would like the security of MPs across the country to become more standardized and uniform, as there is currently variation in the level of security that various members decide to remove.

Find out more about the Houses of Parliament

Right now, most backbenchers will not have the police protection afforded to senior ministers.

Sir David has died after being stabbed during surgery – where MPs hold face-to-face meetings with voters – in his constituency of Southend West.

Speaking to reporters at the scene on Saturday morning, Ms Patel confirmed that a security review of MPs was underway “to ensure they are protected so that they can serve their constituents in an open manner, but safely”. .

The Home Secretary said “further guidance” led by House of Commons Speaker Sir Lindsay Hoyle would soon be given to MPs.

“We cannot be intimidated by any individual or any motivation – people with motives that prevent us from functioning to serve our elected democracy – so on that basis we put measures in place,” Ms. Patel said.

“We will continue to review and strengthen the measures and rightly so.

“And we will continue to absolutely abide by the principles by which we are elected to serve our constituents in the open way that we have done, but also by recognizing that there are security and protection measures that we must take.”

The review is being conducted as part of Operation Bridger – a national police security operation to boost the security of MPs that began after the murder of Labor MP Jo Cox in 2016.

After the operation started five years ago, many MPs received remotes that connect them to emergency services and panic alarms they can place in their homes and offices.

Ms Patel’s comments came as a senior Tory MP called for a temporary break in face-to-face meetings between parliamentarians and their constituents following the murder of Sir David.

Tobias Ellwood, who has been hailed as a hero for his attempts to save PC Keith Palmer’s life in the Westminster terror attack in 2017, said physical engagements should be halted until the Home Office has completed its review of MPs’ security.

Posted on social media on Saturday morning, Mr Ellwood, who chairs the influential Commons Defense Select Committee, said: “Members’ engagement with the public: this is a vital part of our work – our accessibility to the public.

“But understandable huge anxiety among MPs now. Until the Home Secretary’s review of MP security is complete, I would recommend a temporary break in face-to-face meetings.”

However, not all MPs agree that normal business should be temporarily disrupted following the murder of Sir David.

Former Tory cabinet minister David Davis told Sky News he disagreed with his Tory colleague Mr Ellwood’s suggestion that face-to-face meetings between MPs and voters should be suspended, adding, “I don’t think it would be a good reflection of David’s memory to stop this in any way.”

Mr Davis told Sky News: “While we all love and admire him, what we should not do in response to his tragic murder is sever that bond of which he was the absolute champion. . “

He continued, “I mean, of course we should be careful – maybe we should do things to try to make sure that the people who come to us are in good faith and so on – but I think that a break would be a bad idea.

“It would be a terrible reflection of what David (Amess) stood for. David himself was the ultimate constituency MP and you can see it in the response from people in his constituency.”

Please use Chrome browser for a more accessible video player 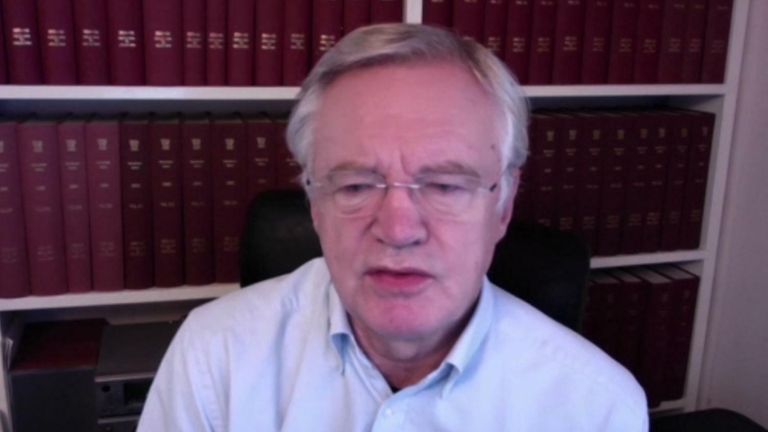 “Suspending in-person meetings would be a bad idea”

High Peak Tory MP Robert Largan said he would continue his weekly counseling surgery on Saturday and invited members of the public to come without an appointment.

Another Conservative MP, John Redwood, posted on social media: “We need to ensure that our representative traditions continue as David Amess would like.

“Violence must not stifle open debate and MPs’ secure access to the views of voters. Margaret Thatcher spoke the day after the Brighton bombing to argue that the murderers do not win.”

Meanwhile, Kim Leadbeater, sister of Jo Cox, who is now a Labor MP herself, said many MPs would be “scared” by Sir David’s death.

“My partner came home and said ‘I don’t want you to do this anymore, because next time that phone rings, it might be a different conversation,'” she said.

Sky News asked fellow Conservative MP Steve Brine if he feared for his own safety while serving as an MP.

And Labor Secretary Lucy Powell said Greater Manchester Police assured “extra support” was in place for her after the murder.

She tweeted: “I have received a number of reassuring calls from the Greater Manchester Police Department today. Additional measures and support are being put in place. Much appreciated.”

Veteran Labor MP Harriet Harman said she would write to the Prime Minister asking him to support a President’s Conference to review the security of parliamentarians in their constituencies following the death of Sir David.

The amount of money spent to protect MPs increased dramatically after Ms Cox’s murder in June 2016.

Accounts from the Independent Parliamentary Standards Authority showed MPs spent £ 2.5million on security in 2016/17, up from £ 170,000 the year before.

Ms Cox’s murder came six years after Stephen Timms was stabbed twice in the stomach during a constituency operation in east London.

In January 2000, Andrew Pennington died saving the life of Cheltenham MP Nigel Jones when they were attacked with a samurai sword.